The next event with CHALLENGE.3W starts in  Registration
Toggle Bar

No Calendar Events Found or Calendar not set to Public.


The CHALLENGE.3W system developed and supervised by Martin Lümkemann (de) and Henrik Gyarmati (hu). It consists of the following major components: record of fight results averages QR codes or manually. Transmission and storage of all results directly to a cloud-based database. Statistical evaluations and rankings of the results by a freely configurable matrix, direct live display of important statistical values during an event such as a tournament and to transmit a reporting component to the results and statistics on print media. CHALLENGE.3W is licenced under Creative Commons Attribution-NonCommercial-ShareAlike 4.0 International licence.


Under "HEMA-freefight" is defined as a sporting confrontation of two fencers with the appropriate protective equipment and blurred Swords free, ie without prearranged actions against each other. In the vote, there are different systems, one of which is the used in our system 3W-HALAG rule. So CHALLENGE.3W based on these this rules. We fight with full contact. 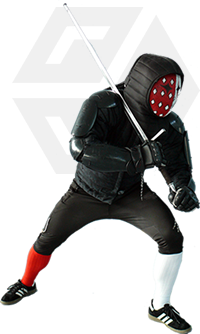 The goal of every HEMA-fighter is to “survive” a duel - fought with protective equipment and as little rules as possible - achieved through years of training, practice and research. Certainly not an easy task as each group, club and organization emphasise different core areas in the art of fencing. Some want to fight as realistically as possible, others want to establish a tournament system, while still others have their focus on entertaining spectators. Our association pursues a clear goal: the human beings, observe their individual and human capacities and encourage their continuous development.

This quite epic project is more difficult than one would think of in a daily training routine. How do I know my strengths and weaknesses in a free battle if I do not have a "personal trainer" by my side? Do I have the instructions of my coach successfully implemented in the next fight? How often do I "survive" a fight? How often can I injure my opponent even before I "die"? Who is my personal Nemesis?

After a free fight training -with an average of 10-20 fights- a participant has a good “feeling” about how he/she cut off on that day. But what is the status after 3-4 weeks? Or after 6 months? Do I have developed myself and do I survive now more fights than before?

Goals
These questions motivated us to develop a system that should have these main characteristics:

ease of use (no need for referees, list writers, etc.)
provide extraction of as many and complex information as possible (evaluation and comparison also over a time scale)
keep up motivation of the fighters (using "gamification" elements)

“How much can you know about yourself, you've never been in a fight?" Tyler Durden in the movie “Fight Club”

The system is currently based on a very simple set of rules called "3W-HALAG" (CC BY-SA 3.0 DE). Detailed information is available here: 3W-HALAG.
This rules are based on the so-called HALAG rules that were developed and written down by Marcus Hampel and Tobias Wenzel. The rules are deliberately simple and show a certain radicalism. There are no winners, only survivors. The only trophy or the only prize is to stay alive, best uninjured. There are no referees, each fighter counts the hits he receives by himself. The battle ends after a "deadly" hit on the head and / or two "non-lethal" hits to the body. After that one last blow of the “killed” is allowed. Marcus Hampel states:

„On the one hand we eave no stone unturned to grope as much as possible to the ideal of "real combat", on the other hand, we have a built-in emergency brake ... we believe makes sense, because injuries can not be simulated, they can only be realized.“Marcus Hampel

Thus our free fights end for every fighter always with a clearly defined status:DEAD WOUNDED UNHARMED

2. SCAN - After a fight you scan your result into the system. 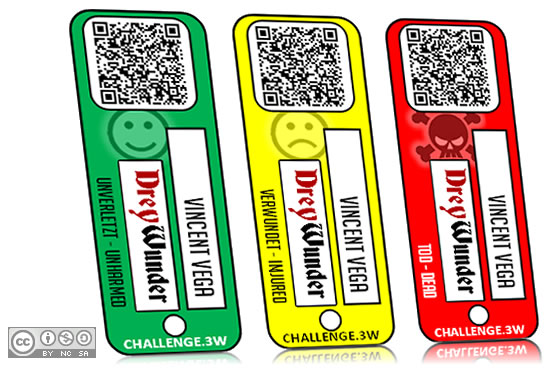 At the end of a fight, the results should be recorded uniquely as quickly as possible, without the need of a supervisor. After testing a few prototypes we decided ultimately for QR codes as a medium. Each fighter owns three “rating tags”, which are specially issued for him. The meaning of the green tag is “unharmed”, of the yellow tag "wounded" while the red tag stands for “death”. All tags carry a QR code in which the name of the fighter, the current status and some other information have been encoded. Every fighter carries the three tags attached with a flexible cord to his fencing jacket, pants, etc. After the fight the fighter will pull his actual status tag in front to get is scanned. All it takes is for example an internet-enabled mobile phone with an installed app to capture QR codes.

Quick, easy and unambiguous. This is quick and easy, so that there is more fighting with less overhead.

3. IMPROVE - You check and analyze your results and statistics.

“Whoever stops to become better, has stopped to be good." Philip Rosenthal

The collected information according to this principle and the database-based evaluation system allows us a relatively complex analysis. Thus it can be made descriptive statements about your own abilities. Also you can let the whole print out as a graphically enhanced diagrams. Calculated are thereby the individual status (dead - wounded - unharmed), a percentage probability of survival as well as for example the continuity of performance. These values should be improved. 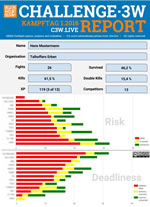 But how do I get to see people to brittle figures and statistics as motivation or even with a sense of self-criticism? The magic word is Gamification. The won fight-points (own status and enemy status) will be computed into so called experience points (XP) when they are recorded into our system. As a result these XPs can be transformed into a ranking table. Special skills, awards, challenge cups and quests will be awarded according to the XPs and status combinations. Who now feels reminiscent of various role playing is right. It indeed creates a kind of role-playing game in which each player has to raise up from the sofa, put the potato chip bag and the controller aside and fight, win or lose in the fencing hall with real opponent using realistic rules.

When awarding experience points, skills and awards not the imagination sets the tone, but real fencing skills that need to be developed and improved. Some examples from our system:

These kind of points shows the advancement of a fighter. For this purpose, depending on the battle events, certain points are then awarded which are cumulated together for a total score (= experience points).

Skills indicate the strength of an ability of the fighter and usually run tangential to the experience points.

Awards are the most common form of reward. These are visible confirmation of success seen by all other fighters.

Under the Challenge Cup or Challenge Trophy is meant an award whose possession is never definitively enshrined.

Quests
Quests are small tasks with a high fun factor, which make learning more varied. Quests are also intended as motivation for participating in training competitions. Unlike awards the simply be awarded if the conditions are satisfied, a fighter must intentionally decide for a quest. A successfully completed quest can also extra points for the status of "Experience - Experience - XP" mean.

To view the progress of the fighter in cumulative form, we integrated the reports on our website. Some components can only be accessed by the individual fighter, while others can be followed by all fighters. In detail, these are:

The values obtained appear on the CHALLENGE BOARD, a sort of starting page when logging in to our system. The Challenge Board is at the heart of the system and shows, in addition to personal data, all reports. Information which is displayed on the Challenge Board will be continuously developed and updated.

A ranking allows you to view the progress of other fighters. Only AVATARS are used in our rankings instead of real names. The goal here is to avoid a direct comparison "Fencer A is better than Fencer B", because this is neither desirable nor justified from the holistic and long-term development considerations within our association.

“Where much is lost, some is to win." Johann Wolfgang von Goethe

Development of the individual swordsman

Main goal of this system is to observe and to analyse your own fencing progress in free fights. Based on the collected data it is possible to develop individual training plans to compensate for existing deficiencies or enhance less defined skills.

Tournaments
Of course, this whole evaluation system can be used in a fencing tournament. We here do not think of classic big events a la Swordfish. Rather we think of  special free fight events, after which there is no cup to win, but in fact you get a detailed report of your own abilities, strengths and weaknesses. The results can be visualized directly on a screen or monitor live as needed. Also conceivable are printed evaluation sheets or documents on which the respective evaluations and possibly rankings are displayed. Whether in the end a public ranking is set up, in order to anounce a "winner", depends on the respective tournament agreement and objective.

Risks
The system is based on honesty.

“Sincerity is probably the most daring form of bravery." William Somerset Maugham

There is no referee and no video recordings for instant replay to revise a result. For this reason, hits are counted (or ignored) only from the fighter who has been hit. How honest everyone indicates his own injuries, is up to the fencer’s own conscience. To illustrate a practical example, this means: If someone cashed a potentially fatal head shot but does not signal this (ie, the fight does not interrupt, etc.) then there is no debate and no quarrel. In this case, the fighter

We firmly believe that fencing is more than just sport and can contribute significantly to the formation of character. Therefore, the risk of "cheating" is to be seen as large, the benefits of this behavior for the fighter is but worthless as he only deceives himself.

Can computerized systems help improve our fencing skills? Yes, that is possible. CHALLENGE.3W is just one of the ways. Video analysis, slow motion shots and various other scientific methods contribute to help "our" HEMA to be more than one niche sport with nerd-factor. We are convinced that long-term analysis and evaluations in a playful environment can be a lot to reveal an overall picture of our own abilities, strengths and weaknesses in a free fight. The reward is then not only a virtual cup or a new patch on the fencing jacket, but also the additionally acquired fencing ability such as optimal kinematics with multiple opponents, the sparing use of our own power resources with many opponents, etc. The actual and all-important reward is quite another:

The own progress, character education and the will to always become a better fighter and person!


We thank Marcus Hampel of the club Anno 1838 for development and support of the HALAG rulebook which served as basis for our own 3W-HALAG rulebook. We also thank the community of interests Tremonia Fechten Dortmund for inspiration to get even more from the HALAG rules by means of statistical analysis.